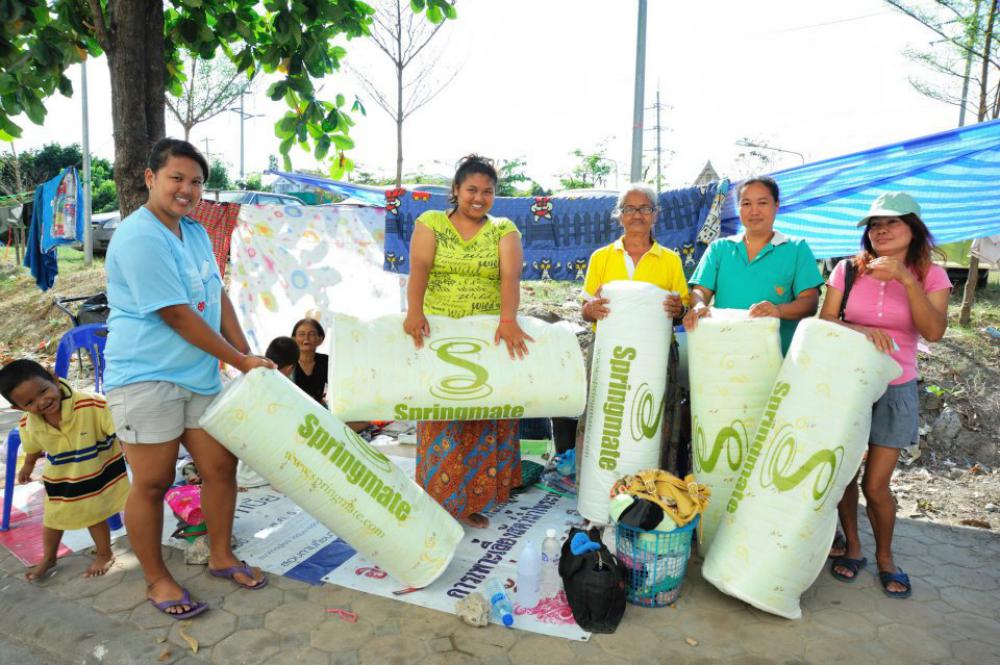 On November 30, 2011, Springmate donated 500 polyurethane foam picnic mattresses, size 3' x 6.5' x 1", at a total cost of 218,000 baht (approximately 7,071 US dollars), to the flood evacuation centre at Rajamangala University of Technology Suvarnabhumi (RMUTSB) in Nonthaburi (a province just north of Bangkok), with Assist. Prof. Jariya Hasitpanichkul, the University's President, acting as the centre's representative. This is the second time Springmate donated mattresses to flood refugees through the "Little Mattresses for Friends in Need by Springmate" fundraising project.

The evacuation centre at RMUTSB was officially opened on October 15, 2011 to provide refuge for those affected by the flooding in Bangyai, Bangbuathong and Tha-it Districts and in the communities along Chao Phraya River in Nonthaburi Province. Initially accommodating more than 1,600 people, the centre provided full-board accommodation together with various activities to help lessen the stress and worries of the flood refugees. Dedicated teams of university lecturers and staff took turn to supervise the day-to-day running of the centre. During its operation, the centre received help and support from public and private organisations in the forms of food and essential items. At the time of our donation, 1,000 refugees still remained at the centre.

All in all, Springmate raised 413,180 baht (280,000 baht of which was contributed by Springmate) and donated 750 picnic mattresses through this charitable project. (The first 250 mattresses were given to the evacuation centre for Rajvithi Hospital's staff at Rajvithi Hospital, Bangkok, on November 9, 2011.)